Predictions for the Future of the CFO Role Under ESSA

As a result, what school-level expenditure data existed was collected by state education agencies, each with different requirements for both details and quality. The latest financial transparency requirements introduced through the passage of the Every Student Succeeds Act (ESSA) in 2015 means that school districts will be required to calculate and publicly report actual per-pupil spending at each of their schools. Traditionally when districts have reported school-level financial data, it has been common to estimate the data, most commonly using average salaries for staff, rather than reporting the true spending at each school site. Reporting actual expenditures is a key, new requirement for most districts across the country. Chief Financial Officers (CFO) have varying levels of concern over the additional reporting requirements depending on their current level of preparedness and estimated impact on their district. Districts will be required to publish the first set of reports in December 2019. Allovue predicts that the release of these reports will result in a noticeable shift in how resource allocation decisions are made. This white paper will discuss three predictions for how the new ESSA regulations will evolve the role of the CFO over the next three to five years.

School districts may be concerned about additional work imposed on their finance department, especially if they meet at least one of the following conditions:

1. Spending data has not been tracked at the location in which funds were used.

Personnel data (i.e. salaries and benefits) is commonly held in centralized accounts and will need to be allocated down to the schools incurring these expenses based on staffing.

2. The chart of accounts, or the district’s financial data architecture, is incomplete or unaligned to state reporting requirements.

Legacy charts of accounts were created under policies that have evolved while the financial architecture has not. The introduction or elimination of codes in the accounting structure may complicate tasks such as purchase requests and reporting. An outdated chart of accounts also makes it difficult to map district financial data to the expense categories required in state reporting templates.

3. School-level financials have not been communicated to the Superintendent, Board, or community in the past.

Increased public scrutiny of district and school-level financials may stress current accounting practices that, while accurate and reasonable, do not result in easily interpreted, detailed data for lay consumption. Districts not presently communicating this level of detail to their leadership team and Board may need to spend extra time preparing for new expectations from the community.

While these scenarios require the most time and labor from CFOs preparing their district’s financials for ESSA reporting, other situations may require less effort.

Implementing an SBA formula to allocate dollars down to the student level makes it easy for districts to attribute spending to the school-level. Districts that budget by schools invariably record expenditures by schools. Additionally, adoption of SBA is typically motivated by a desire for equity and transparency. Districts who are already communicating school-level spending with their stakeholders will be ahead of the curve.

Districts who have already developed the practice of recording spending at the location in which it takes place are likely to experience minimal workload increases. However, these districts may want to improve their communication about school-level spending with local stakeholders.

All expenses at districts in this category are attributed to support their one school. However, these districts may also need to work at proactively communicating with local stakeholders.

CFOs of districts that are already recording spending at the school-level may still need to adjust the manner in which they map their data to the state reporting categories. However, this work can be structured in a scalable and predictable manner that reduces the time and effort required for future reports.

After ESSA’s primary reporting requirement has taken effect, districts may desire to push their reporting beyond the confines of fiscal year actuals, such as:

Additionally, CFOs should expect changes to how financial reporting categories are defined. Once ESSA legislation passed in 2015, some states immediately began preparing for ESSA reporting while others waited for clarification. Some state departments of education were quick to define and outline recommended solutions for their districts, while others provided minimal guidance. This contrast resulted in a lack of standardization across states as to what constitutes categories of spending that should be directly attributable to schools.

PREDICTION 2
An era of comparability

As states adopt standard reporting requirements and baseline expectations are established, the quality and availability of education finance data will likely improve. This should ultimately reduce the level of effort required to provide access to school-level financial information.

The goal of the ESSA finance regulation is to help educators better understand how resources are directly supporting students. When properly adopted, this will result in the comparisons of schools and resources within and across districts and states, yielding richer and more frequent analysis on school spending.

In 2018, New York State required 76 school district to report their budgets at the school-level; in turn, the Education Trust-New York promptly published a visualization tool to compare submissions across districts. CFOs should prepare for additional scrutiny from the press, community stakeholders, and external organizations who access and analyze their data. Published state report cards will likely yield similar analysis when they are released next year. 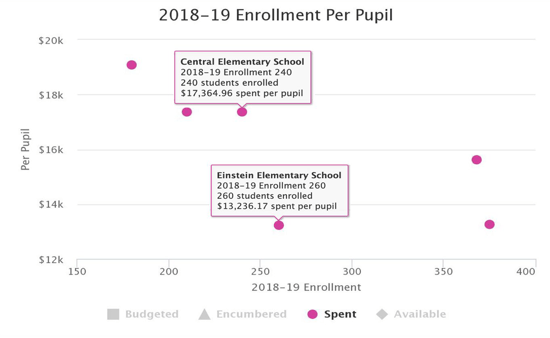 Many education finance professionals aspire to evaluate the return on investment (ROI) or cost-effectiveness of funds spent within their districts. As ESSA makes school-level financial data more accessible we will better understand how dollars are spent in support of students. There will be a temptation to draw direct correlations between academic and finance data but this will not yield productive insights without further data quality assurance, careful modeling of known cost drivers, and additional local context.

PREDICTION 3
A new relationship between the CFO and CAO

CFOs and Chief Academic Officers (CAO) will work closer under ESSA legislation with a common goal of optimizing resources for students in their district. ESSA requires districts to implement interventions to improve academic performance within a specified amount of time at schools designated for comprehensive or targeted support (CSI and TSI schools). District leaders may choose to extend these same interventions to non-CSI and non-TSI schools within their district, resulting in a broader dialogue around resource allocation, specifically adequate versus equitable funding at and across schools.

The additional financial transparency will make budget data more accessible to academic leaders for the purpose of aligning strategies and resources. The conversations and collaborations between these critical departments should standardize the practice of ensuring financial decisions are more directly tied to goals for students and their academic success.

Changing Tides for Superintendents and Boards

The risk of losing funding due to noncompliance will fuel greater involvement by the Superintendent and Board to understand their school district’s resources. These stakeholders should be prepared to:

Each of the predictions work towards ensuring that students are successful. To help CFOs embrace this change, here are three suggestions CFOs can embed into their current ESSA preparations to encourage efficient reporting and strategic conversations in years to come:

< Head back to Resources